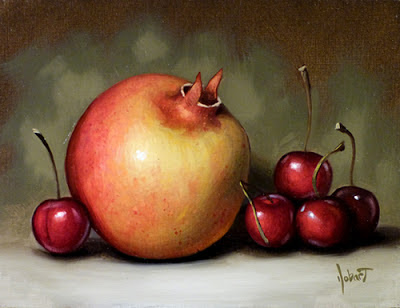 This painting is definitely one I will remember! I knew the yellow pomegranate would be fun to paint as soon as I saw it. I figured it would go well with cherries.When cherries are in season - everything goes with cherries. I began the painting as usual on the first sitting. On the second day, I put my standard background on. I didn't like it. It didn't make the orange pop enough. i thought about just leaving it alone because I was already at the six hour time limit, and when they go over it, it gets expensive. I decided the painting was more important than sticking to the time limit.

I carefully wiped the background off, and put a second one on. Still no good! I did that five times before I came up with the one in the picture. The painting took far longer then six hours but I think it was worth it, the greenish color really makes the orange pop out.

Posted by Clinton Hobart at 7:08 PM