A Variety Of Apples 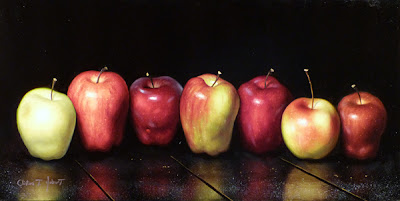 This is the first apple painting I have done with a dark background, well one this dark anyway.
The thing I like about painting apples is how different they are. I know I have said this before, but the reason I line them up is to emphasize the differences. I spend many hours at the market sifting through the apples looking for the most unique, oddly shaped apples I can find and then I put them next to regular apples so that the differences stand out. Notice the lean on the middle apple - I love that! The long stem on the apple second to the right is also something I was excited about in this painting. 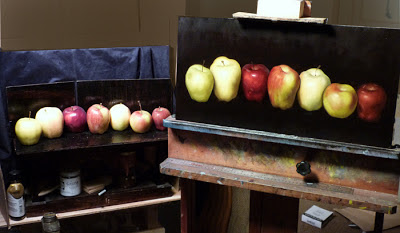 Notice the difference in the above painting?
I very seldom make mistakes that are this big in a painting but since I did, I figured I would post about it. Originally in the set up I had two more bright yellow apples. They were so light that they were practically white. I found the contrast to be too much against the dark background, in fact it was hurting my eyes working on it. Even though I was reluctant to start over after having put so much work into it already, I knew the painting would be stronger. I always say "The more you don't want to make a change in your painting, The more important it is to make that change"..so i followed my own rule. I had really liked the big light one on the left. He was my big, white, dumb, slow moving, character, you know the one I mean, don't pretend you don't. Even though he didn't want to get painted he was a very tasty apple.
I think the painting is better off without him. 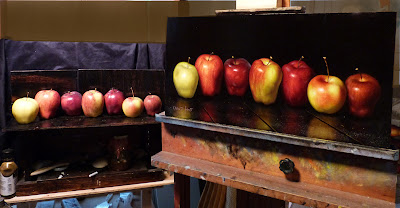 Above is a shot of the finished paintings and the apples on stage. I think it gives some perspective to see the apples next to the painting.

Posted by Clinton Hobart at 3:47 PM