Pomegranate And Grapes 10 x 20 with a Process Photo 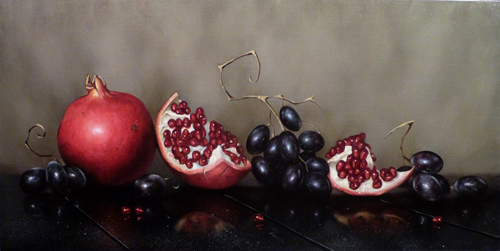 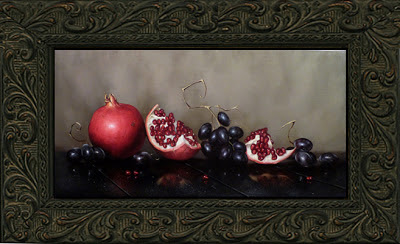 Each Holiday Season I try to put a few larger pieces up for auction on Ebay. Last year I think I put up three. I plan to put up three again this year. I am offering two frame choices on it as well, for the first time. Personally I like the grey one shown above, but since most people seem to like the gold frame I have listed that on in the Auction as well. Both of the frames are Larson Juhl imported mouldings. 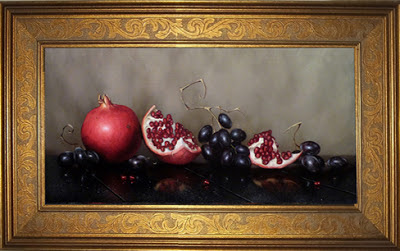 Below is a process shot from the second day of painting. This type of piece usually takes around seven to ten days to paint depending on the drying time of the paint. I had to paint this one fast because the open Pomegranate will turn color quickly. When it is wet and humid, it takes me alot longer because each layer of paint must be dry for me to move onto the next area. I liked it just like this, I really would have preferred to call it done at this point, but I have to make a living...... 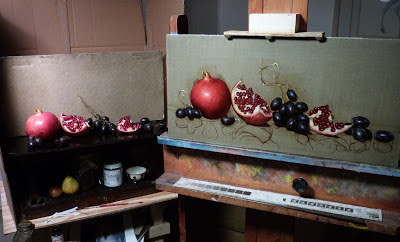 Posted by Clinton Hobart at 10:12 AM No comments: 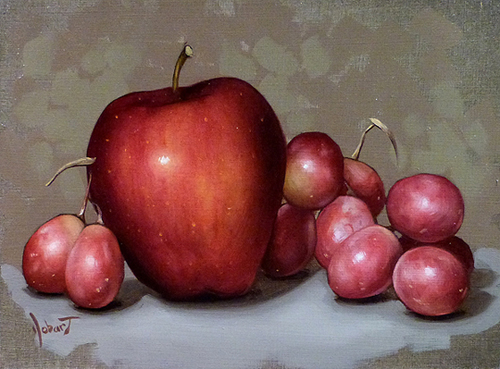 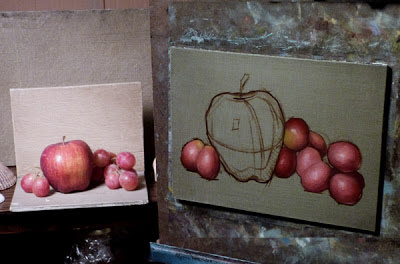 The trick in trying to paint these Minnies is keeping them to six hours each. Normally an apple as complicated as the one above would take three sittings for me to paint. I had to simplify it a bit in order to keep it to just two sittings. The grapes are painted as just round pink balls first. Then I fill in the details on the second sitting. If the grape isn't round first, all the detail in the world won't make it look good.
6 x 8 Oil on Panel.
SOLD

Posted by Clinton Hobart at 9:49 AM No comments:

Baby Pears All In A Row 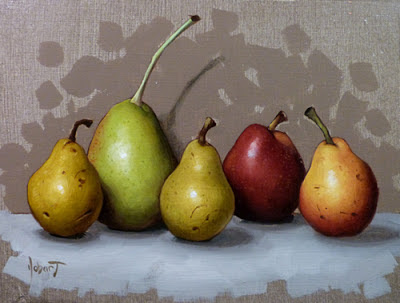 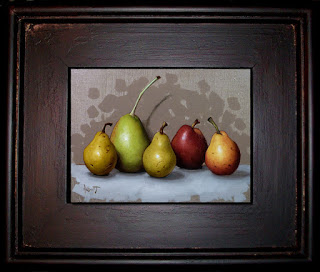 I seldom see these tiny baby pears when I am at the grocery store or market but this week they had them!
I usually try to make at least two paintings from them but I have so many projects going on right now, I just had time for one.I took the title from the Eagles song "Pretty Maids All In A Row"...I have no idea where that came from either.


Posted by Clinton Hobart at 7:10 PM No comments:

Stop Stealing From Me!!!! - A Few Tricks Every Painter Should Watch Out For 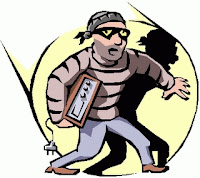 Hello Folks! It's now the Holiday Season, my favorite time of year.......but if you are like me, you have a tendency to be just a bit nicer this time of year. Well unfortunately, some people out there will take advantage of your good nature. Here are a few things to look out for.
I do hate watermarks on my work, so I take that chance, but it does act as a deterrent.


Well that is all I can think of for now, I know there are hundreds more. and anyone reading this feel free to share a story as well. Have a Happy Holiday Season, but as a great teacher of mine told me....... "Keep Your Eyes Open"!

"Legal Guide For The Artist" on Amazon


Posted by Clinton Hobart at 7:57 AM No comments: 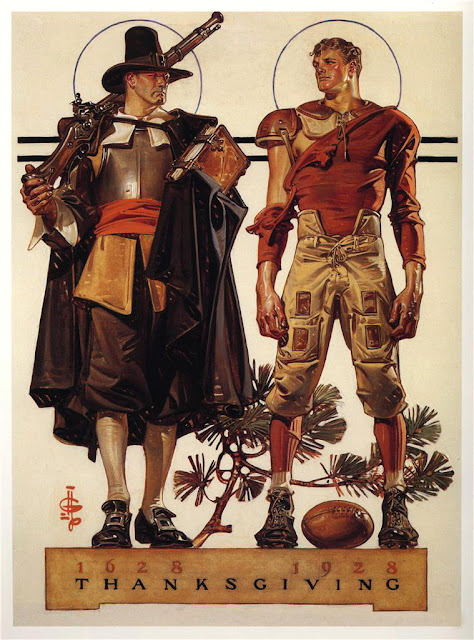 This is a Saturday Evening Post Cover by one of my favorite painters, J.C. Leyendecker.
Happy Thanksgiving Everyone!


Posted by Clinton Hobart at 5:47 PM No comments: 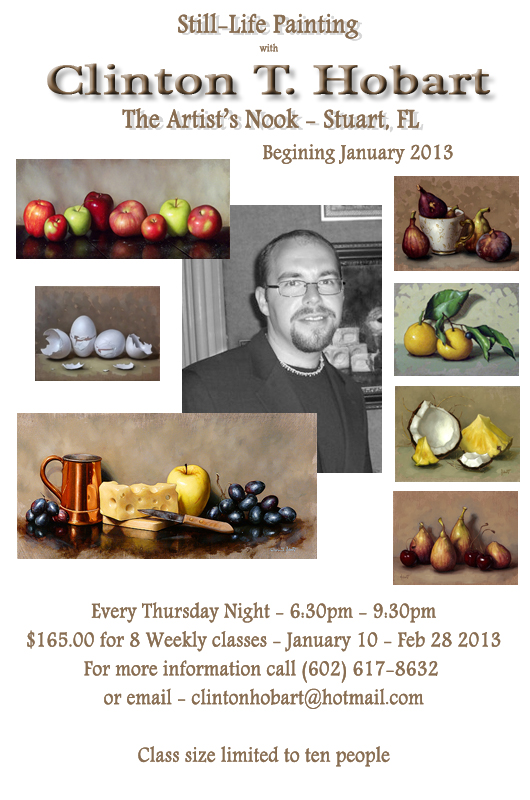 This January I will be teaching two weekly painting classes. Last year I did a Demo in Palm City, FL and two workshops at the Hobe Sound Fine Art League, both went extremely well. so I thought I would do a weekly class which is really the best way to learn to paint.

I set the class to run for eight weeks. If it is a success I will do another eight week class in March and April.  Portrait will be on Tues Night, and Still-Life will be on Thursday Night. Both 6:30 to 9:30pm


Posted by Clinton Hobart at 6:23 AM No comments:

White on White - Pear and Figs 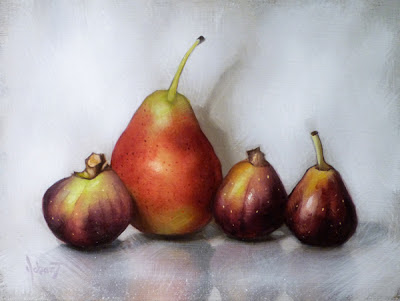 This is the first in a new series! It might be a Mini Series.....I decided to paint one of my mini model stands white, then I put a piece of glass from a picture frame on it to create the reflections I like....
I plan to do about four or five more like this...


Posted by Clinton Hobart at 7:32 PM No comments: 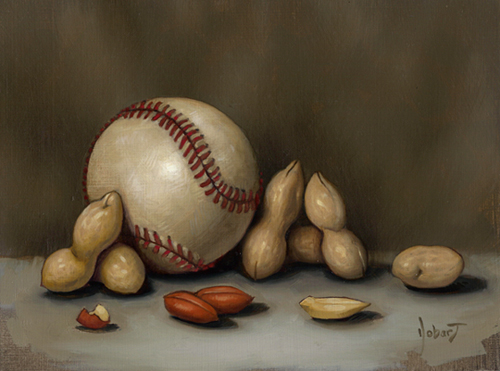 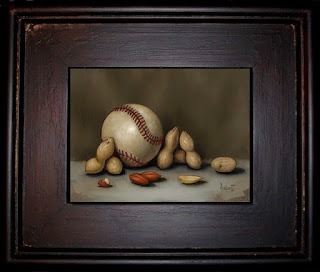 I have wanted to paint this one for a long time, which I am hoping to turn it into a series. There are certainly enough baseballs and peanuts out there!Being a NY Yankees fan, and have been since I was a kid...yeah I know - 90% of you now hate me for it.....but I remember having peanuts at the ballpark. When I was really young the Yanks were terrible so we got really great seats, then in the mid 90's it wasn't so easy to get those great seats anymore...but for a pretty good reason!
Actually I was thinking of doing other sports as well, maybe golf or tennis but I am having a hard time coming up with item to put with them. What goes with a tennis ball the way peanuts go with a baseball? Hmm.... if anyone out there has a suggestion....

Posted by Clinton Hobart at 9:00 AM 2 comments:

Why I Love Going To Gallery Openings!

Last week my girlfriend and I went to a gallery opening in Stuart, Florida. It was the first one I had been to, besides my own, or close friends, in years. I went because a friend of mine was in the show and I went to support her work. Immediately upon entering you are bombarded with all sorts of artwork. Some portraits....I think they were portraits, a large painting of a bag lady pushing a cart, some lovely palette knife works, and then something which looks like the artist glued rocks to the canvas. I'm not there five minutes and the owner of the gallery calls for every ones attention and then says that each "artist" will be speaking about their work.....Of course!!! Oh boy, here we go. This is going to be a long nite.
Well, mister rock guy has to go first. Mister rock guy is an older guy, greyish hair, and he is wearing leather pants and brown boots.....He looks like the type who should have been wearing corduroy pants and hush puppies....but no, of course he has leather pants on. Now he starts talking about his "art" and in one sentence has referred to himself as an "artist" at least three times...."jeez, is he done yet" I'm thinking. He goes on to say how he makes his art as a gift to the infinite universe. I want to throw up and he just started. His work is large paintings of clouds - we will say clouds, it was something else but I don't want to outright say who this was. So he makes large paintings of clouds out of resin and "10,000 tubes of paint", some of the clouds are big, some not so big. Each cloud is a separate chunk of something, he claims resin, looks like he is gluing rocks onto a canvas and painting over them.

He goes on for a few more minutes about how important he is, and how his work has given the art world a "new horizon" - his words, not kidding, and then asks if there are any questions. Someone asks "How long do they take to make"? He responds with a five minute story about how he was approached by the owner of Big Tent Circus, and how he instantly loved his work and wanted two of his "Masterpieces" - his words, again not kidding. After five minutes on this story he asks the woman, did I answer the question? Sharply she replies "NO, I asked how long it took to make?" He goes on again for about a minute or two before finally saying about five months, but adds how often he works on them for 15 hours straight and forgets to eat because if he stops he will break his mood and ruin the piece. I'm thinking if that festering turd took five months to paint you are either working for one minute a day or you are an absolute moron.This crap should take no more then two days to paint. I'll even tell you how!!! You can make it out of anything....Styrofoam, paper, cardboard, whatever.... then pour the resin over the top. Let it dry overnight and badly paint it the next day. That is all, five months my @$$! - two days and if it were not for the drying time I could make these things in a half hour. One of them was just painted white. Yep, that guy! And all of his work looks almost exactly the same...I was really temped to use David Leffell's line and ask him how he knows when he is getting better? But I controlled myself.

He also goes on to say that his paintings of clouds are more majestic then the sky itself....I really wanted to slug him. Now he starts telling a story about how he has to paint, "HE HAS TO" paint because some woman he loved was dying and her last words to him were to paint, "for the love of god paint!!! I added that but it felt like that......Now before you think I am heartless for laughing at the story, keep in mind, he is telling this to a room full of strangers, many of which he hasn't met yet.
At this point I couldn't take it anymore and walked outside. My friend met me out there, and after about a half hour we looked in and and he was still talking!!! He was the first of about five artists who were going to speak.....and the crowd had stopped paying attention long ago and were talking amongst themselves....but that didn't stop him!! I felt bad for the other four. I didn't stick around to hear them, and I wansn't the only one.

I have been meeting this guy, in one form or another for years. I went to art school with him when he took five sheets of blotter acid to help express himself. He slept for two days and when he woke up painted a red line on a black canvas. Thank you very much.

I met him in art history class when he told everyone Warhol was more important then Rockwell. Nice Mohawk pal, love the blue in it.

I met him at a party once when he was a photographer taking pictures of roadkill, telling me "I'm an Artist too!" Wow, glad we work for the same union, let me see your card.