Did Vermeer Paint In A Giant Box?


I regularly read James Gurney's Blog called Gurney Journey. Recently he posted on an experiment of the Camera Obscura done by Jane Morris Pack, a painter and educator in Greece. The short of it is that she thinks Vermeer built something similar to the box below. It  allows the artist to sit inside the box and whatever is outside the box gets projected inside, but upside down, so that the artist can then trace the image. 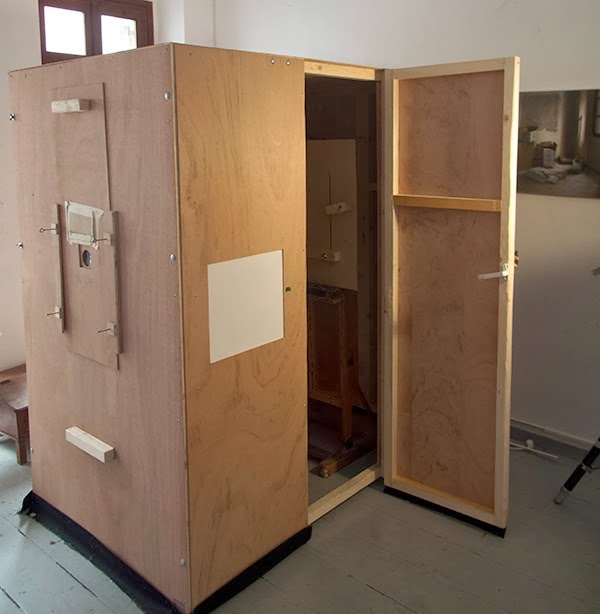 I admire Jane Morris Peck's research, and am not saying she is wrong or arguing with this in any way. I simply don't know if it is true or not. I am also thankful that James Gurney posted it on his great blog. My issue with all of it is WHY? No one seems to have an opinion on this. Why in the world would anyone want to sit inside a dark box and paint with the people you should be talking to sitting outside the box, behind you...

Does anyone else think this is completely insane? Wouldn't it be easier to just learn how to draw? Talk to the models and enjoy the work? I couldn't sit in that box if I were on salary. 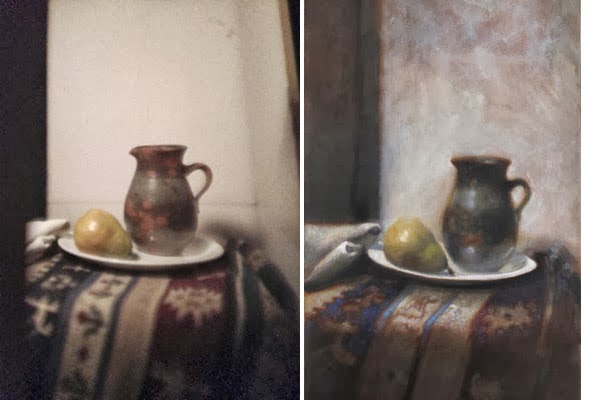 To the left is a shot of a painting made with device compared with a shot of the projected image. Is the image on the left so complicated that it needs to be traced? Is the painting on the right so well done that it justifies the means? I'd say no on both counts. I'm not too shy to say that I could paint that from life...and before you send me messages telling me I'm full of myself, I personally know about a dozen other people who can paint that just as well, if not better - from life, with no tricks. Again, I am not insulting the painting, or the ability of the person who painted it, I am questioning the need for the device.

It reminds me of the old acting story about Dustin Hoffman and Sir Lawrence Olivier.
Legend has it that while they were working together on Marathon Man, to prepare for a scene where he needed to look like a wreck, Hoffman  went for a few days without sleep to look the part. Olivier asked him what was going on and Hoffman replied that he was trying to be convincing in the role. Olivier replied, "My dear boy, why don't you just try acting". I feel the same way about using these devices, "Why don't you just try drawing?" 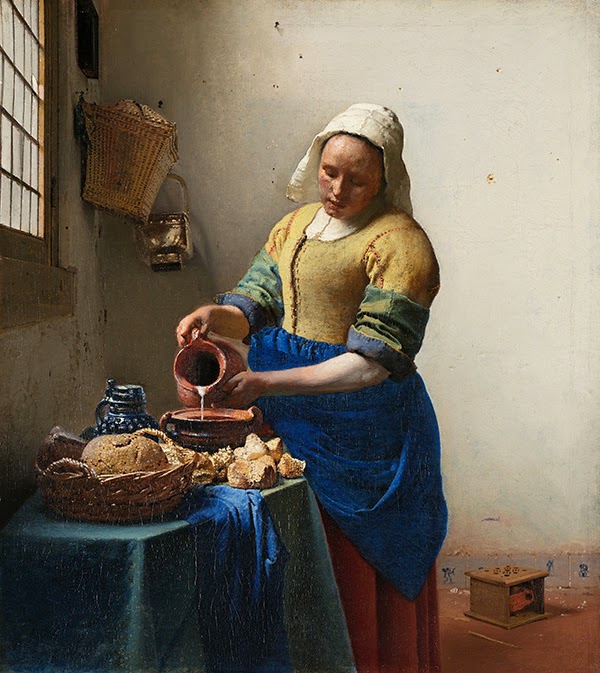 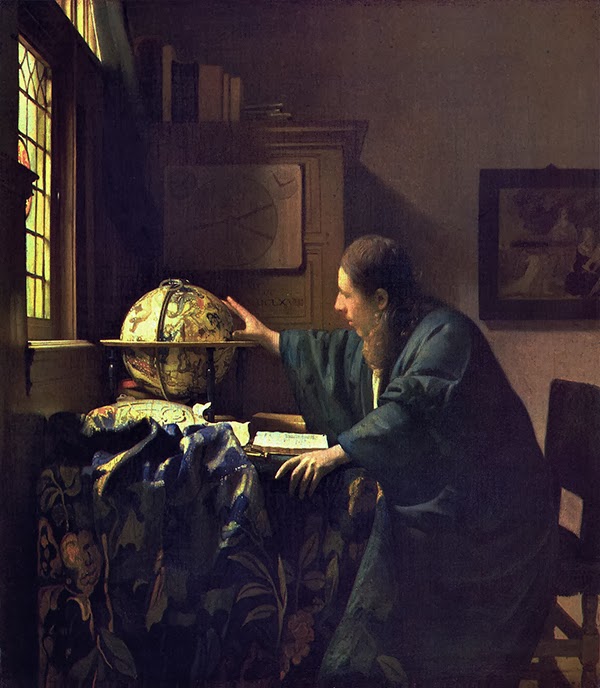 In looking at Vermeer's work online though, I did notice something I find odd. Anyone who has ever painted from life knows that the two paintings to the left have poses which are extraordinarily hard to hold, almost impossible. Are they saying that Vermeer sat in a box and painted a girl holding a milk jug? Have they painted people from life? Most models have a hard time with normal standing poses. Look at the head tilt, any idea how much that will hurt her neck and shoulder?
I see the situation going something like this:  Vermeer sets up the model with the milk jug and gets into the box. After about twenty minutes, she says "My hand hurts." He says "What?" - because he is in the box, so he gets up, and gets out of the box, and she says "My hand hurts." So he says "Can you give me ten minutes?" She says "I'll try" So he gets back in the box and she is shaking all over the place so he gets back out of the box and they take a break. Then she says, "This hurts, can we change the pose, maybe I can just hold a glass of milk?"
"No!" he says, "You must be pouring the milk into the bowl, next to the bread, in the otherwise empty room, or it will ruin the painting!" Then he gets back in the box, and after five minutes she says "My hand hurts.", and he says "What?" because he can't hear her - he's stuck in a box, so he gets up, and gets out of the box and she says "I need another break...."
And the painting below that? Try holding that pose for more than a minute. No one seems to be talking about that aspect of it. My guess would be that he had elaborate mannequins to hold the drapery in place while he worked on it in front of him.That way the models would only have to pose for the faces and hands. I once put a hat on a stick so that the model didn't have to sit there while I painted his hat. 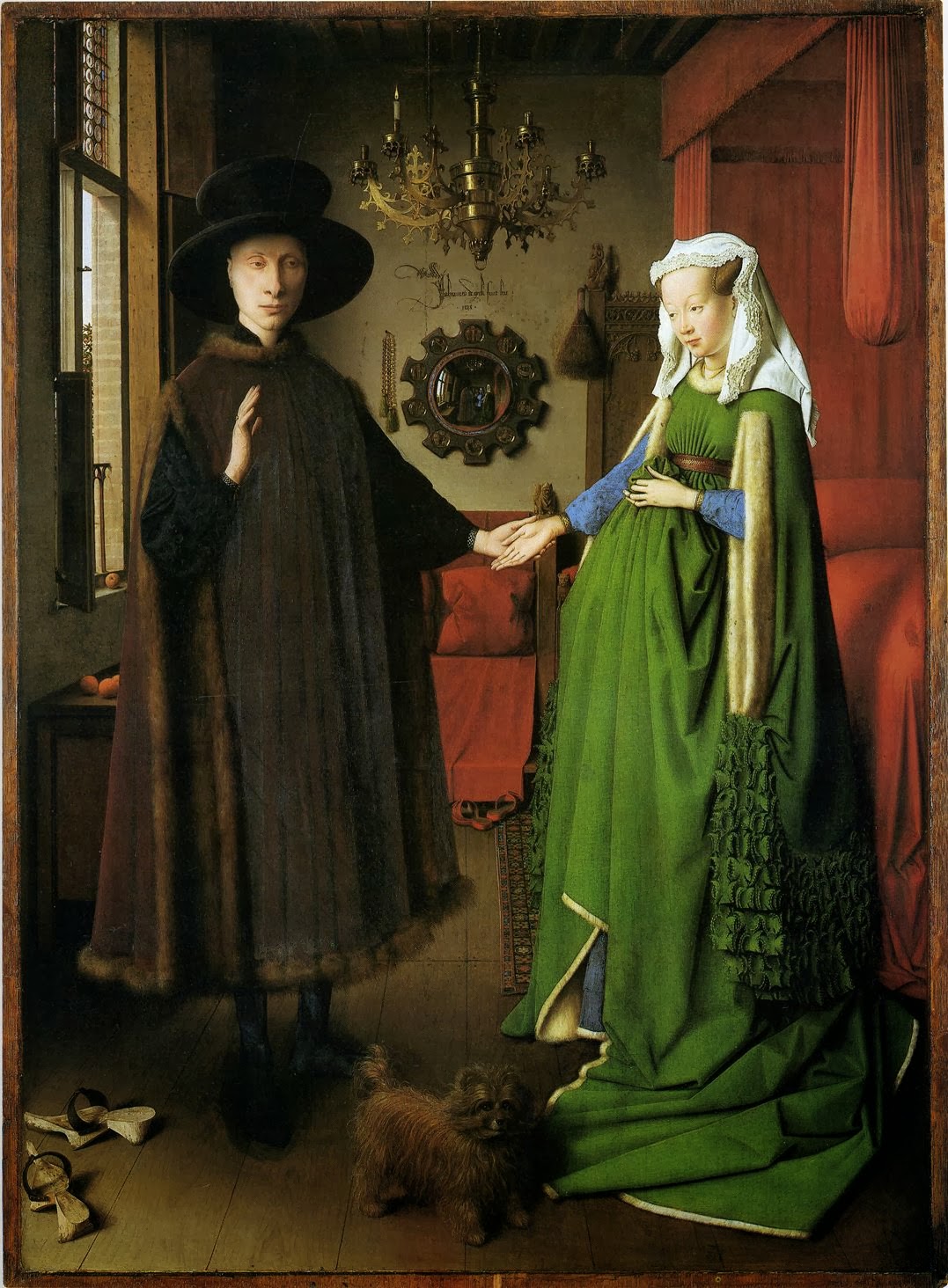 The last time I heard something like this it was in regards to the famous Van Eyck painting of the Arnolfini Portrait.
It was claimed that he too used some sort of lens or projection device. There is a great article in Scientific American showing that idea to be most likely untrue. A link to that article:

I have no idea whether or not Vermeer or Van Eyck used these tools or not. I'd like to think that they didn't, that they were just amazing painters and everyone making these claims is just jealous. But then again I was completely convinced that Milli Vanilli sang their own stuff.

I don't use these tools because they don't interest me. I also don't worry about the technical level of my work. Would my portraits and waves be better if I used this box or traced them...yeah, probably. But I don't care. I'd rather have an honest picture. This is how good I am, period, no tricks. I don't see any reason it has to be any other way. To me, having something to say, the human element, honest skill, and personality, are all more important elements of painting, which are lost when using these devices...not to mention that, I like being able to say "I freehanded that!"