Painting Has Repeatedly Saved My Life 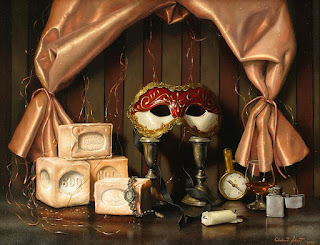 *Warning - This is an excerpt from a book I am working on which is basically an autobiography, that I am aware I am not ready for. It is unedited.

My natural tendency is too much. I eat too much, I drink too much. I paint to much. I read too much. Everything is in excess and extremes. I don't do small easily. I'm probably crazy. And I like to have fun, I freely admit it. But it has to come with balance. You can't do what I do with out a lot of really hard work! So I've had to create rules for myself in order to keep it in check. Never doubling up on sensations, for example or drinking when I'm depressed. Whether it's eating or drinking,  I can't let it get out of control. And it does... when you find yourself partying all night with a rockstar and someone says at five am "did we lose the midget?" You might be out getting out of control -  bring it back in. The midget comes back into the story later.

I post a lot of stuff about working out and staying in good physical shape because I believe that by me doing it someone else might do it too. I never tell anyone what to do. I just "do" and hope it inspires.

But, I've really never written about why I paint. Sure I could say it was the only thing I was ever good at. But that's not completely true. I was a bartender, and cook for a while and loved both. I also came very close to getting a degree in Psychology, which is still on my mind. (Pun not intended, realized it after the sentence was written). But art just took over. I often say I didn't choose it, it chose me. I find that many artists have a lot of similar struggles in life. Most have anxiety issues, awkwardness, social dysfunction, bad at relationships, drug and alcohol problems, and often downright mental illness.
You add to that a horrible childhood and you may have some serious talent.
Add to that mix one alcoholic parent and it can lead to you being the best of the best.
And if you're lucky enough to get one of your parents into a mental institution, you may turn out to be an absolute genius - if you can get passed the mess.
I think Frank McCourt said that a normal childhood is hardly worth living. I agree, but I have no choice in it.
Kurt Vonnegut's mother was in an institution, and Schopenhauer's mother pushed him down a flight of stairs. That's the company you can keep with just one insane parent. 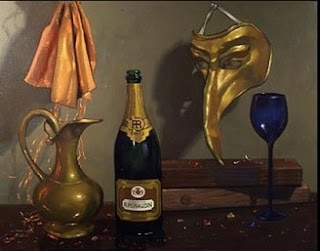 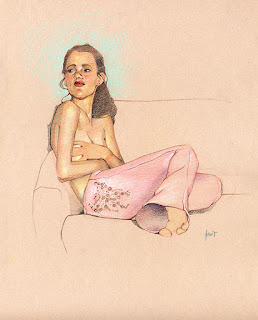 I did a great deal of partying before I was even close to 21. People thought my brother and I were destined for jail or mopping floors. We have both mopped our share of floors by the way. It's not fun. The good part of partying like that when you are young, is that you get it out of your system. When I finally went to college, I watched all the kids who led sheltered lives in high school go nuts at the parties and bars while I was drawing and working, I'd already done that. When In my sophomore year I  found out Disney was coming to town looking for 30 students for an internship for the following summer that sealed it. I was in work mode. I had one year to make that happen. I did it and I won't repeat that whole story here. I was bartending at the time so believe me I still had my share of fun. But my work always kept the fun from getting out of hand. Always kept me in check, I can't paint on even one drink. And Ive tried. Every once in a while I get cocky in the middle of a painting and think "why not have a drink I'm good enough!" - No I'm not. Neither are you.

After art school I moved to Arizona and began teaching figure drawing at Scottsdale Artist's School. I was broke as most kids are who just graduated art school. A friend of mind rented me a bedroom in his house for $200 a month until I got on my feet. He was an alcoholic. Brilliant, but an alcoholic. The other girl in the house was a drug addict and a high school guidance counselor. Oh, some day when I tell that story! Her boyfriend was a member of a well known bluegrass band in the area. They would play at a bar and all come back to the house to party several nights a week, sometimes all week long. So you can already imagine me in my little room trying to paint and draw with all this going on. Even back then I liked to paint from life so I would hire models and bring them back to my little bedroom and I'm there painting with a nude or half nude model in the room and outside the door are 100 screaming drunk people and a live band. I swear it's true. Only a dedicated artist or a nut-case would be at a loud party with a half naked girl, and spend the time painting! I'll post a link to this on FB and at least one or two people including one or two of the above mentioned models can confirm it. (The drawing above of the girl in pink was one I did at that time) 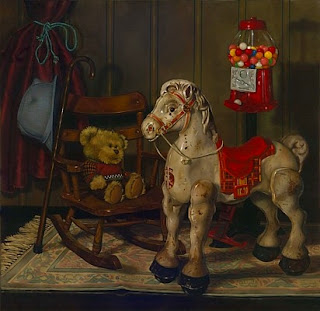 Sometimes after I was done painting, I did join the party, usually late, around midnight or later but believe me the party was still going on. 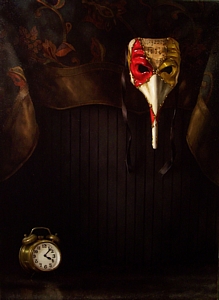 So here is a story you have to pay attention to - OK, pay close attention, may involve some interpretation if ya know what I mean.

So, one night at the party in the living room, someone had a can of coke with them and offered me a sip. I said I don't drink soda. They said, one sip won't kill you. She was cute, and so I thought, well one sip won't kill me. Nothing will do you in faster than cute. So we had a great time, and I woke up in the morning and thought, "That was amazing!, we need to get a six pack of that coke and do it again tonight. I love soda now!" And something in my brain clicked on and said in a deep god-like voice "you can't control this, it's too powerful" And my study in psychology kicked in and I realized that association was also a large factor here with my desire to repeat the night. And so I didn't do it. I stayed in the next night and painted. I never had another drop of that coke since. One time and done. I knew I couldn't control it, and it would effect my painting and that couldn't happen. So painting saved my life that night.


I'm guessing at this point maybe one or two of you are still reading this far. I hope you are amused, I try to keep it fun. If you are reading this, on my Facbook page on the link to this post leave a comment - "I liked the part about the pineapple" And I'll send you a treat in the mail. I love a random joke that makes no sense. But back to the story... 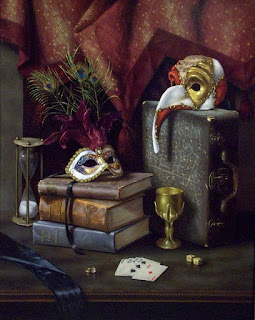 No matter what happens, it's painting to the rescue. If I get turned down for a job, I don't go to the bar, I paint more not less! If some one of you lovely ladies rips my heart out Indiana Jones style and takes a big bite out of it, I take it out on a painting. If you were to look at a timeline of my work you can actually see where the really bad break-ups are by the paintings I made at the time. Anything, anything at all I turn to painting as the solution. One ex said to me, after a horrible break-up "Are you going to be OK?" I smiled and said "I'll be sad, but that will be the worst of it" She said "What are you going to do?" I said "What I always do... paint". The painting to the right is completely inspired by a bad relationship. It's called "Almost". I've never admitted that publicly before. I say the opposite.
Picasso said "Artist's lie to tell the truth"
I lie because I told the truth.

The painting to the right is titled "A Shoulder To Cry On" I painted it when a friends of mine's father was very ill. The idea was that a gourd and and eggplant are very different. I wanted to see if I could create sympathy by the placement of the objects. The person who bought it caught it immediately. Part of me wishes I didn't sell it. Those paintings are my kids, and I love every one of them. Even the bad ones. I spoke to an artist not long ago who said "I never painted anything I loved" I was floored, jaw droppingly floored. I don't know what gets him up in the morning. I have paintings I'll never sell. Never. Don't care what I'm offered. Don't confuse that with me thinking I'm great - it's not ego. It's about connections, It's about creating a moment you can never get back.

I've said above I can't paint with even one drink and I paint almost all day long every day when I'm not at a show. I can't paint hung over either so that keeps me good the night before too. I also can't paint on any sort of pill or medication. So I've had to learn to control anxiety, control when I go to sleep, and when I wake up because I can't take anything at all. Maybe Advil but that's it. My demons, unfortunately are all under my own control... well, as best as they can be. When I first met my demons I tried fighting them, after a while I just decided to clear out a drawer for them, The upside is that I am who I am, naturally. There is probably something wrong with me, no definitely something wrong with me. I've been told I have ADD, Bipolar Disorder, and my favorite a Peter Pan complex. I don't know, don't much care. Something makes me get up at eight or nine am and paint until two or three in the morning every day. Something makes me feel like Superman half the time, and I'll even take those bad days because they come with the good ones. I do yoga, work out, eat right, those three help. Maybe some pill can even things out, I don't know, I'll never know because whatever I have, I'm not messing with it. I refuse to live in mental mediocrity. So If I'm crazy, I'll take it, because I  like my crazy right where it is. I don't see posts like this often. It takes guts you know. I'm bearing my soul so that one of you may read this and say, hey, me too, at the risk of negative comments and getting made fun of. Oh well, time to go paint.