A few months ago I received an email  from Creature Features asking me if I would like to participate in a group show honoring Disney Imagineer Rolly Crump. I said of course!

Let me give you a bit of background on who he is. Rolly Crump began his career with Walt Disney Studio as an "In-Betweener" in Animation at the age of twenty-two. Walt was fascinated with his ideas and moved Rolly out of Animation and into what was then WED (the original Imagineering company) and he became one of the first Disney Imagineers.

"The Museum Of The Weird was to have been a Madame Tussaud's-like attraction inside The Haunted Mansion's entrance. This attraction within an attraction was to have been a spill area, showcasing an unnerving display of oddities from all corners of the world.
Such oddities included a melting candle man, gypsy and voodoo artifacts, a chair that stood up and talked with guests, a appearing and disappearing organist, among other trinkets and items.
Though the attraction was ultimately scrapped in the end, when the Haunted Mansion became a ride-thru, many of the concepts and illusions made it into the final attraction. These included chairs with faces, a ghostly organist, a seance chamber, busts and portraits that followed you, and paintings that changed right before your eyes." From Wiki 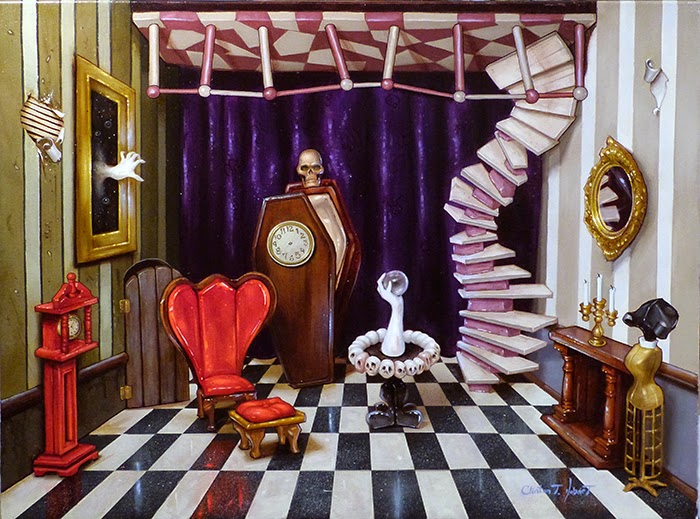 Above is my finished painting for the show. It is 20 x 26 Oil on Linen


Before I started the painting however, I had to build the set from which to work.
To the left is one of Rolly Crump's original drawings for the place. I used this as my reference. I wanted my piece to feel like this, but to put my own stamp on it in some way. I thought the drapery worked well in a drawing, but was to busy for a painting. My first priority was to simplify it into something that I thought would work as a painting. 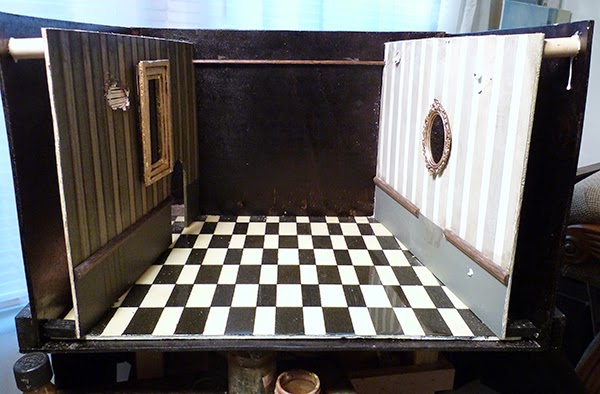 I started by building a box and the floor and walls. While I was building these, I was searching local shops and antique stores for any objects which would either work in the set, or that I could modify to work. I found the fireplace, coffin, mirror, candlestick, and dress mannequin in doll house furniture. I had to modify the chair so I built the arms out of fabric and wood. Everything else I had to make from scratch. 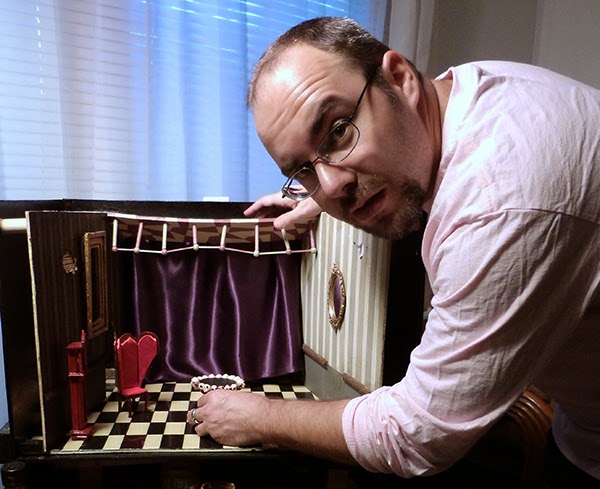 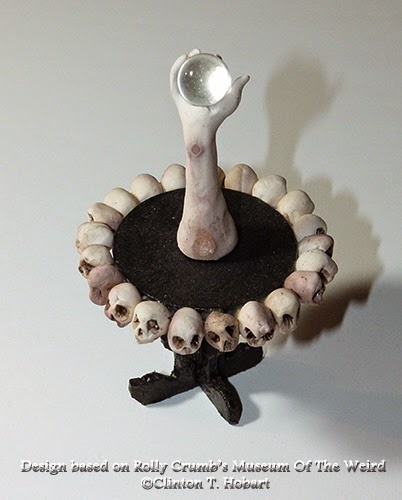 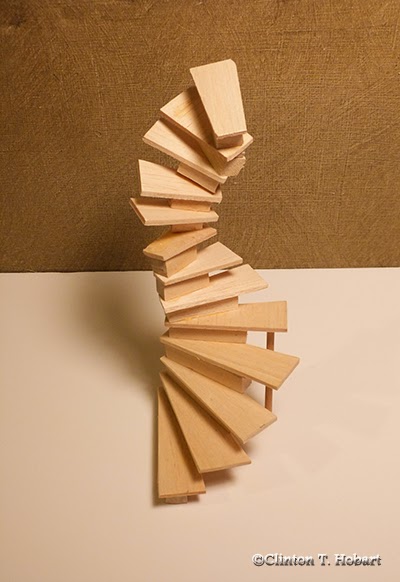 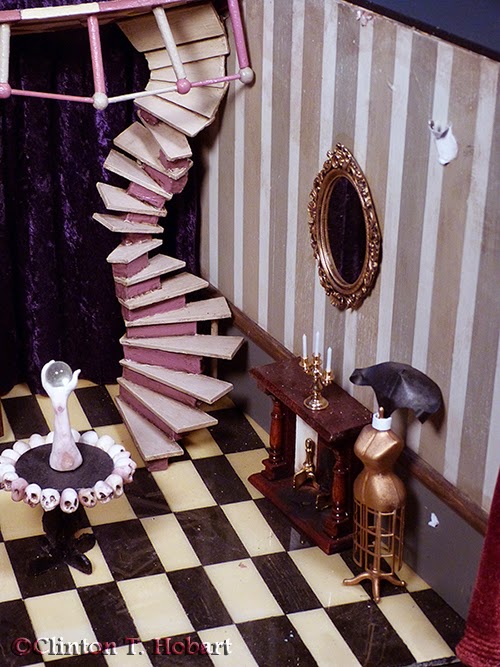 The staircase was far harder to build than it might look. Getting it to move into the shape and direction I had wanted, took so many attempts I lost count. Even though it was meant to be surreal, I also wanted it to look slightly believable.

Below is a shot of the finished set. 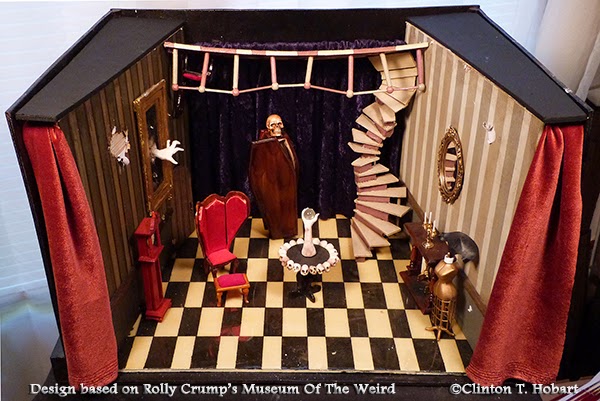 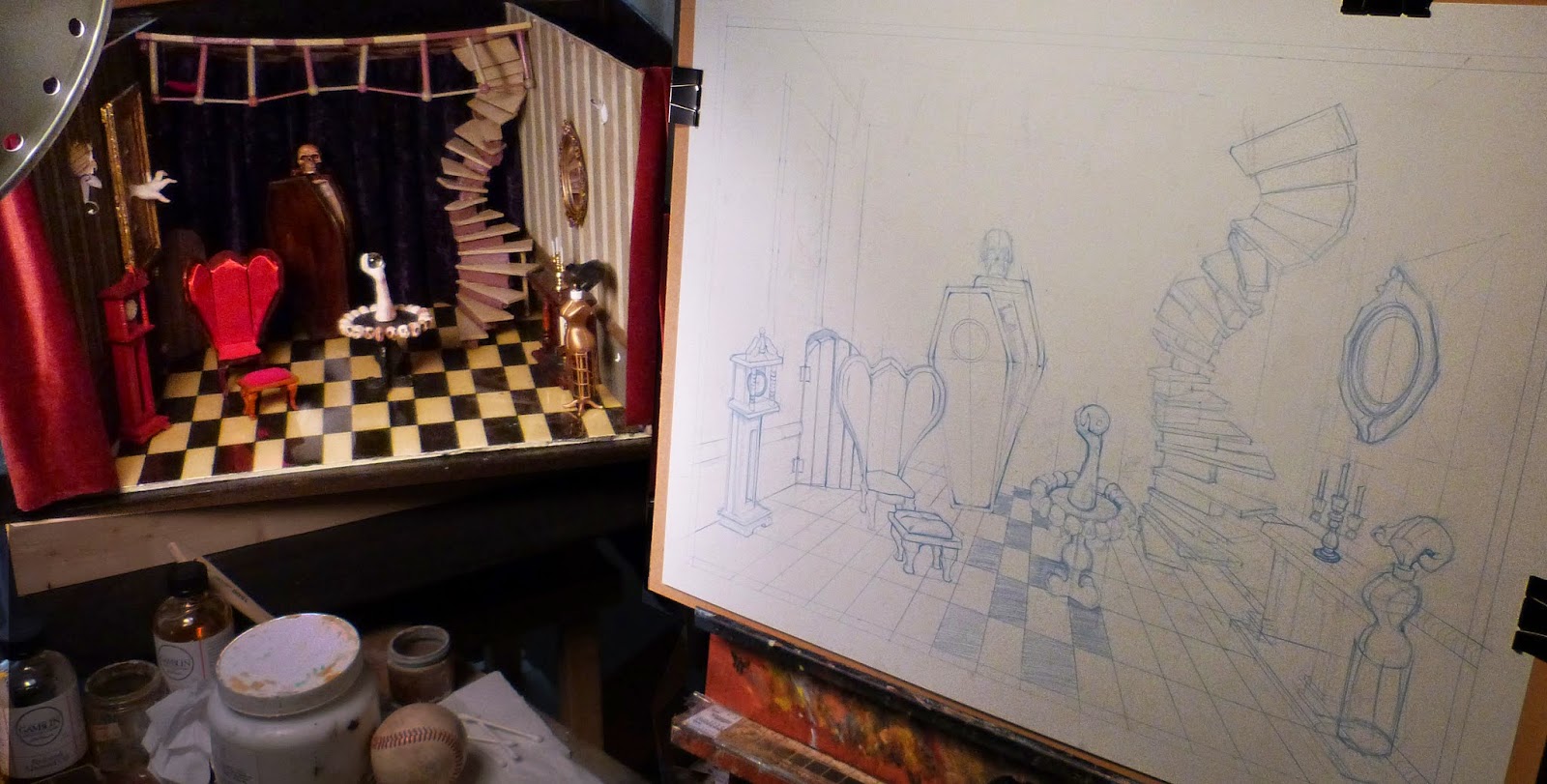 Now that the set was finished, I could begin working on the painting.
I had at this point less than a month to get this painting finished. I knew drawing all of these complex shapes with a brush was going to take forever so I decided to do a drawing in pencil first. 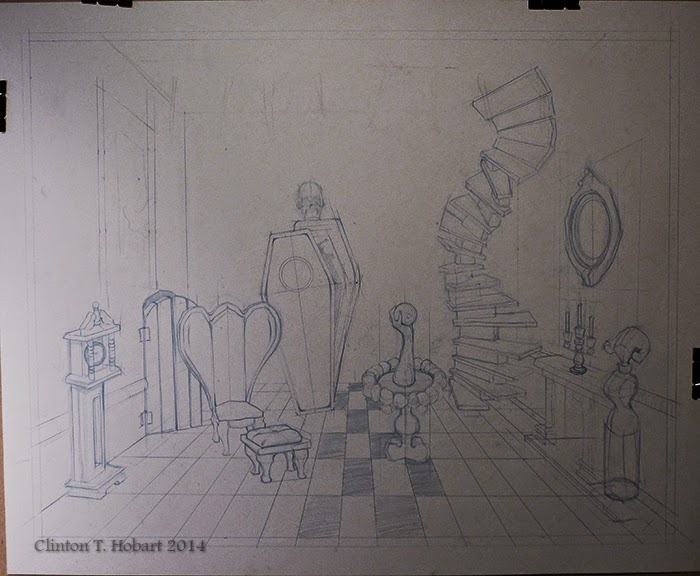 I actually wound up drawing this four times. The first drawing I just scrapped and had to start over. The second went well. After I finished the drawing, I brought it to a reprographics place and had them make a photocopy of my drawing. I then brought that home and transferred the drawing to my canvas. Then, I re-drew the entire thing with a brush and burnt umber, and let it dry overnight. I will do another post on the painting process shots another time. 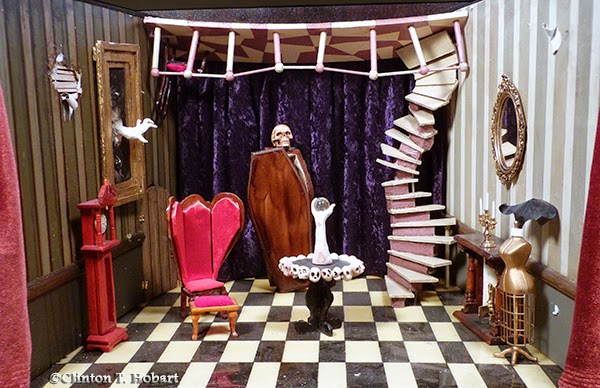 Below is a shot of the photocopy of  the finished drawing. 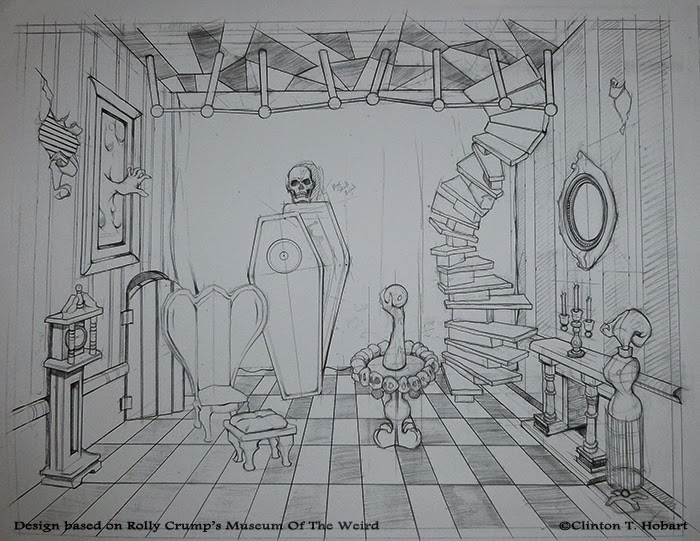 The show is at:
Creature Features
2904 W Magnolia,
Burbank, CA

Posted by Clinton Hobart at 8:59 AM