Ebay's Policy On Helping You Out If Your Artwork Is Stolen? - They Don't!

*Updated 10/15/2014 - As of today the Chinese listing is still on ebay. Ebay has neither contacted me by phone or email.

* Updated 9/16/2014 - I spent over an hour on the phone with ebay today. The below report was last wednesday, and the listing is still up. I called today to see if I can get a supervisor on the phone. I was transferred SIX times. SIX! Each time I was told that I would be connected to a supervisor who can handle this sort of thing. And each time I was put back into the system to get another random operator. The sixth guy actually told me I was being put back into the system each time and that I was never going to get a "specialist". All he could do was file a claim.
So one again, ebay did nothing. I was also told that ebay doesn't take down listings immediately. I said, sure they do. If the listing had alchol in the description or child pornography you can bet they would take it down immediately.

Finally I reached a supervisor who said that all he can do is to file a report, and investigate. I asked why the listing isn't taken down while they investigate, after all my name is on it! He said he can't do that. The listing is still up.

Wed Sept 10, 2014
Recently, while looking at some items on ebay, one of their suggestions popped up. Imagine my surprise to see that ebay was suggesting that I might like my own work! I looked at the seller, guess what - China. What a shock!
I reported that listing using the "report item" button, and then I went to the sellers page only to find another one!
I reported this one, and nothing happened - no response. I posted it on Facebook, and had some friends report it as well. Again, no response. The auction is still up.


How can we expect to stop the  Chinese from stealing our work if American companies look the other way? Shame on ebay for not taking this down immediately, and contacting me with an apology.
My signature is still on the painting in the photo! It's not like they needed a detective to figure this one out.
I know now that they will do nothing, but I just wanted to make the news public. If someone steals your work off of ebay...You are on your own. 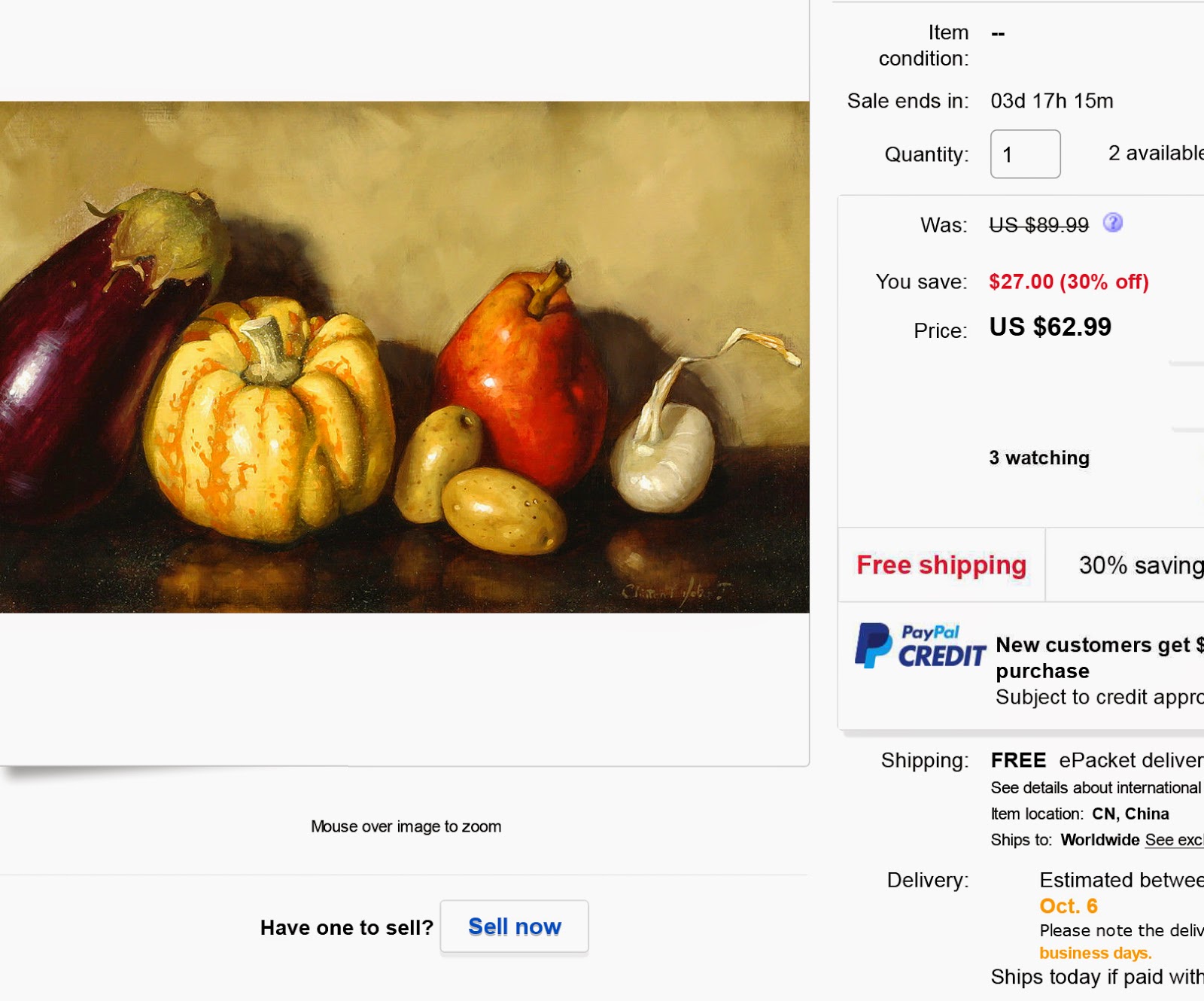 This is a shot of my painting titled "A Shoulder To Cry On". I painted it in 2008 during a time when someone close to me was going through a tough time. The painting was an attempt by me to see if I could convey that emotion through fruits and vegetables. I thought I did it and it is still one of my favorite paintings. Also a milestone for me was that it wasn't painted in a studio. A was staying in a small apartment for three weeks and my alloted painting space was a tiny section of the dining area. I had to set this up directly next to a portable easel and make it work. I entered it into the Salon International at the Greenhouse Gallery and I believe once again, that this is from where they stole the photo. I remember the first time I saw that the Gallery was posting such high-res photos of the artwork on their website, thinking I wonder how they stop theft of images. The answer is, they didn't. Later that year it won an award at the Ridgewood Art Institute annual show in December 2009 and sold out of that show. 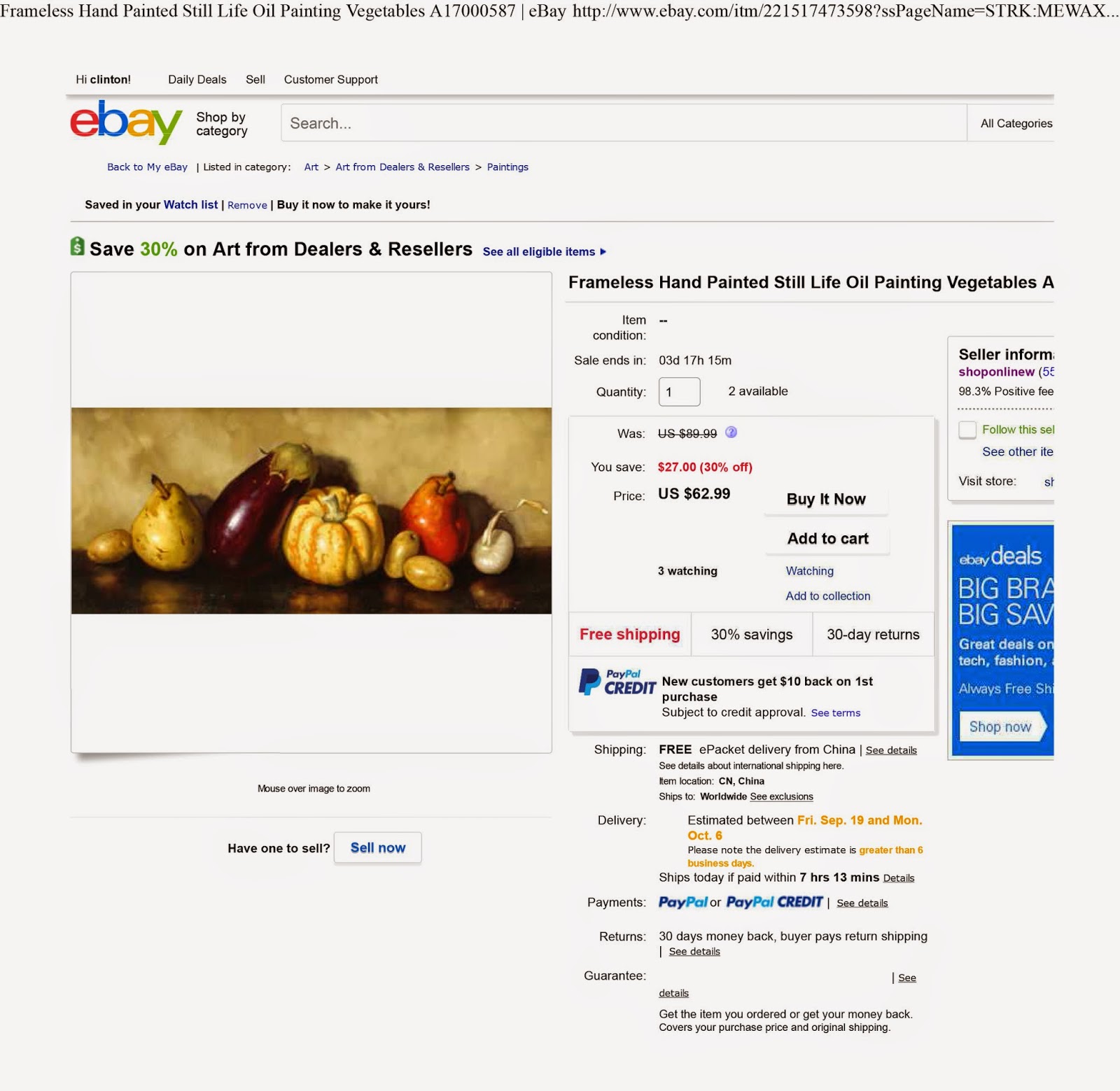 Posted by Clinton Hobart at 7:04 AM