Currently there is a lawsuit going on which claims the Metropolitan Museum of Art (The MET) is illegally overcharging it's visitors. 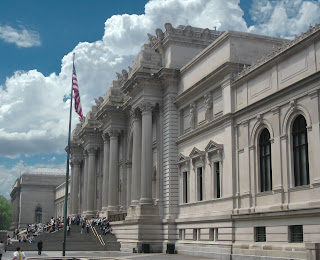 The price on the sign is $25. Underneath the word "Admissions" it clearly has the word "recommended".

"Many people, especially foreign tourists, don't see it, don't understand it or don't question it. If they ask, they are told the fee is merely a suggested donation: You can pay what you wish, but you must pay something." AP

I don't pay full price, and never have. Well that's not true, I did the first time....and then I learned. Just like everyone else who goes more then once.
I went to school in NYC and went to the MET about twice a month, sometimes every week. I give one dollar every time I go. Over the years I have given them several hundred dollars, not including things I have purchased while I am there. I am perfectly fine with that. I went with some friends once and one of them wanted to give a quarter for five people, which in my opinion is the other extreme. I felt that a dollar each was very fair. If you live in the New York area, you probably know that the admission is suggested. If I go to the MET a few hundred times and give a dollar each time I go, they make several hundred dollars. But if you only go once in your life, why shouldn't you pay the full $25.oo? I just went to the Norman Rockwell Museum, it was $18.00 to get in, not suggested, and their collection is a fraction of the size. Worth the $18.00 I might add!

"The suit seeks compensation for museum members and visitors who paid by credit card over the past few years, though some who choose to pay less than the full price pull out a $10 or $5 bill. Some fork over a buck or loose change. Those who balk at paying anything at all are told they won't be allowed in unless they pay something, even a penny." AP

The excuse of "I was a tourist, and didn't know" is lame. It happens to all of us, toughen up pal. I fell for the shoeshine trick in Chicago once. I went to school in NYC and fell for a shoeshine in Chicago! Why? because I was a tourist, and was caught off guard in a strange city. I would never have fallen for that in NY. It cost me twenty bucks, but I didn't call my lawyer.

When I go to any museum I ask "Is admission suggested?" Sometimes it surprisingly is. Most times it's not.
Has anyone asked themselves, what if the MET gets pissed off by the lawsuit and just says "forget it, it's twenty five bucks now."

From an article in the Atlantic:
Still, the suit goes way too far, "seeking compensation for museum members and visitors who paid by credit card over the past few years." Clearly, the museum can't be expected to find and interview 20+ million people to discover who would have paid what amount between $0.01 and $25 had the font size for "Recommended" been slightly bigger.

This lawsuit is ridiculous. I like that the sign is vague! It was this sort of well kept secret..."Hey, pal (in a whisper) you don't have to pay full price here"
"Wow! That's really cool"

Even if you paid the $25.00 it is still a fantastic purchase for the money. The bridge toll is $12.00 now which is half of the cost!!  Maybe I missed the sign on the GWB which said "suggested"? Can I sue them? - I didn't think so, but I'd love to pay a dollar to get over it.

Why don't they sue the MoMa? They have been overcharging for years and the work hanging there isn't anywhere near as impressive as the MET.

A few years ago my girlfriend and I went to The MoMa to try to see the Tim Burton exhibition. When we got there we were told it was sold out, at two in the afternoon, for the rest of the day. Two in the Afternoon!? Sold Out?

"So it's not really sold out, you just working me for more money." I said

"Sold Out" is a simple phrase, it means "none left". I'm not really sure how a place without numbered seats could be sold out, but that is besides the point. Thy couldn't fit two more in? Clearly they haven't been on a Transit Bus in NYC.
We didn't get in, and we left.