A Few Photos From Ultracon Of South Florida

This past weekend I was a special guest artist at Ultracon of South Florida. It was my first time at a Comic Con, even though technically I was invited to the Cleveland con first, but that doesn't happen until Feb. 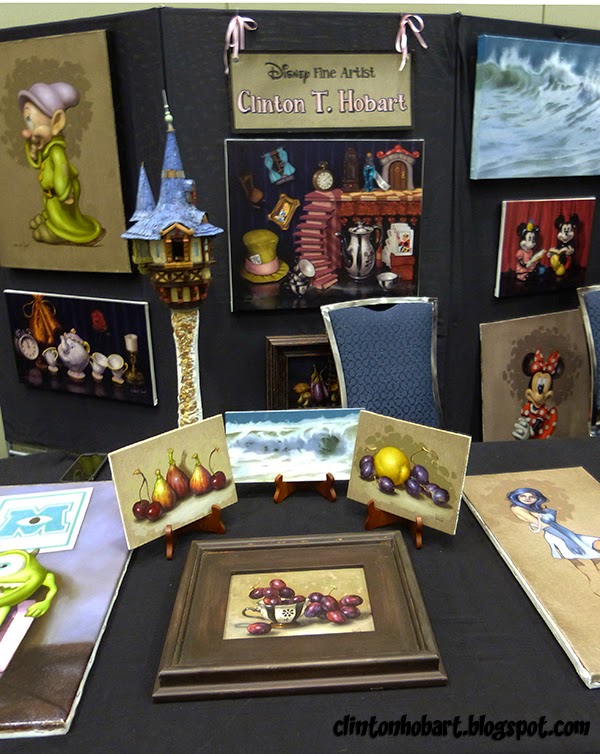 Below is a shot of my friend Matt who plays an incredible Jack Sparrow standing next to comic book writer and creator Larry Hama. The first comic book I ever purchased as a young kid was an issue of G.I. Joe, which was written by none other than Larry Hama. Comic books got me started on both reading and drawing. It lead to me reading novels, literature, Shakespeare, etc. Copying drawings out of comic books as a kid directly led me to oil painting. It was interesting that the first Comic Con I go to I am signing just two tables away from the guy that in some ways put me there. Had that issue of GI Joe been a terrible story, and I never read another comic book, my whole life may have been different. 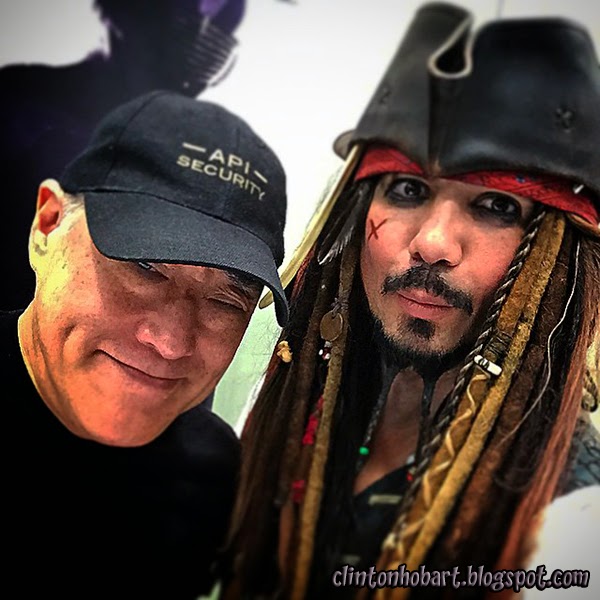 Although Larry Hama didn't actually create GI Joe, he did create many of the characters form the smaller action figures including Cobra Commander. Pretty Cool!

Next to Larry Hama was Brian Muir, who did the original sculpture of Darth Vader and other characters for the original trilogy. That's him to the left of Darth Vader. He has also worked on Indiana Jones, and most recently Guardians Of The Galaxy. His work is amazing. He and his wife were delightful in conversation and very friendly. It was a pleasure getting to know them. 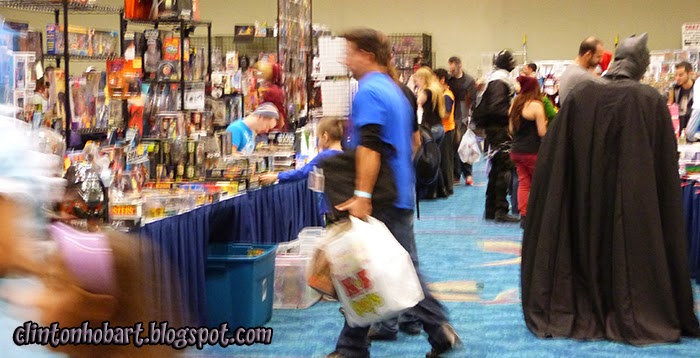 Batman was drinking a lemonade but I unfortunately didn't get the shot - would have been priceless. 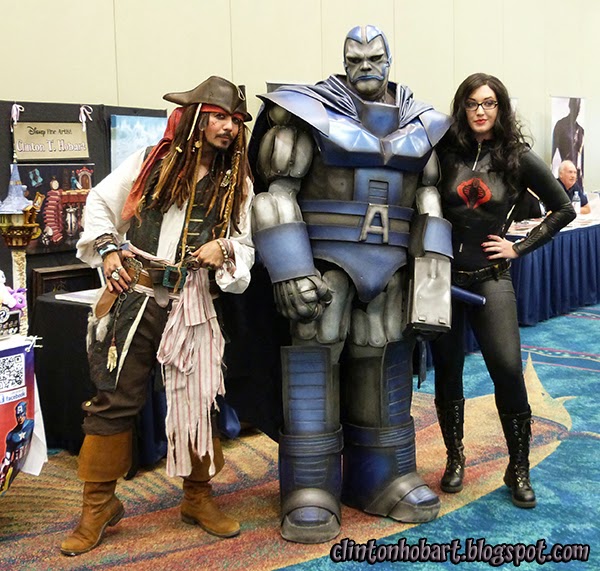 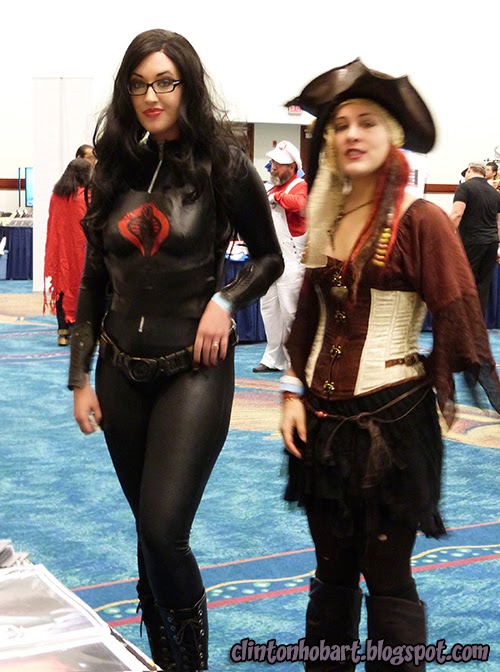 At the table directly next to me was Callie Cosplay. On Saturday she was Wonder Woman, Sunday, The Baroness from GI Joe. Her costumes were extremely well done as you can see. There is Matt again in his Captain Jack costume.  He put an incredible amount of work into the details of the costume and it's amazing how authentic he looks in person. He told me it takes him two hours just to get into it! His business cards are even in a little treasure chest.

I have recently learned that there are mixed feelings in regards to the Cosplayers. Some comic book writers are upset that the conventions are more about the people wearing costumes than the writers, creators, and artists. I liked the cosplay part of it. Callie is very cool, and fun to have sitting next to me. She loved the characters she played and had respect for them. But not everyone did. I was in shock when one girl dressed as Elsa from Frozen was standing in front of my table, and said nothing to me, not even hello. She was so wrapped up in who she was, who was looking at her, that she had a Disney Artist in front of her and she could not have cared less.  When someone finally did introduce us, it seemed a chore for her to be cordial. I told her she should hire a midget and dress him up as Olaf to add authenticity to the costume. Shockingly she wasn't amused.  If you are going to dress as a Disney princess as an adult, when people are looking at you smile! Smile at everyone, especially the kids, and not to ask too much, but when you smile, try and actually be convincing about it. Another girl dressed as "Brave" also walked by and didn't even look. I find that a bit odd. I will add that these were not young kids which I might say didn't know better. You should dress up as a character you know well, love and respect, or at least research. If your dressing up in a costume that makes you "look good" or will get you more "likes" on Facebook, you are doing it for the wrong reasons. I like the costumes, but no convention should put the costumes ahead of the people who created or contributed to them. 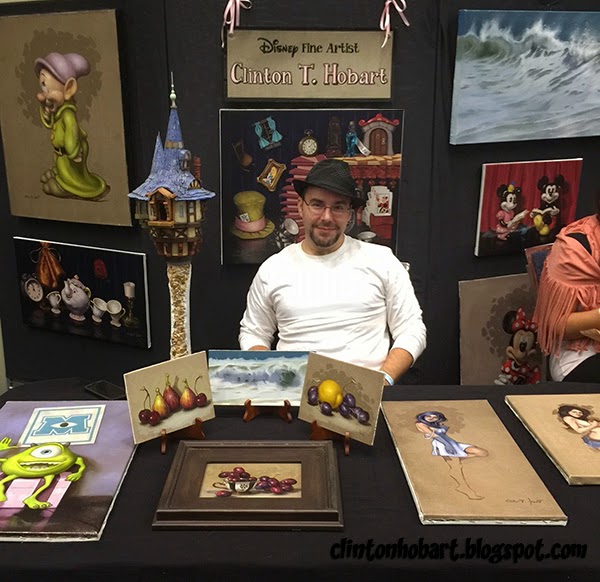 A shot of me at my table. I'm really looking forward to my next Comic Con appearance, I met a lot of great and interesting people. It was a blast!


Come see me this Feb in Cleveland:
http://www.wizardworld.com/home-cleveland.html

To like Callie on FB: Callie Cosplay
To like me on FB: Clinton T. Hobart Fine Art

Email ThisBlogThis!Share to TwitterShare to FacebookShare to Pinterest
Labels: Events and Appearances