"Let It Go" from Disney's FROZEN by The Piano Guys

This came on Pandora while I was painting. Normally I don't get up to see what is playing. Unless it is an emergency "thumbs down", like if they play the B-52's. That will get me up fast. I have learned not to "thumbs up" a song because it usually changes the playlist so if I like a station, I leave it alone.
I thought this was incredible...it got a "thumbs up" I listened to a few more of their versions of songs on YouTube which were also excellent.
I thought the set was behind them was spectacular! I assumed that it was fake but then I noticed that they were wearing gloves with the fingers cut off. I thought, the coats could just be costumes but if they are wearing fingerless gloves, it must really be cold. After the song ended there was a link to the video on the making of this: 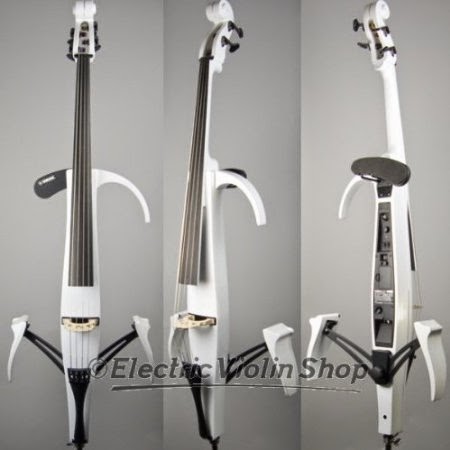 In most of the videos he is playing the real thing but in some clips he was playing this weird 'alien from the future looking thing' so I Googled it because it looks so darn cool!
It's called a Yamaha SVC-210 Silent Cello, Pearl White. Personally I prefer to listen to the real thing, same way I prefer a real book to a digital version, but I get what they are doing and why, and they are fun to watch.

Here is a link on Amazon if you want one: Electric Violin Shop

Posted by Clinton Hobart at 5:48 AM