Does Music Affect Your Work? - It Does Mine 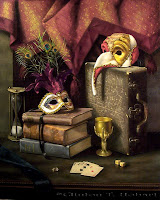 When I am painting, the music I choose is VERY important to my work. It is probably the only area of my life where I come close to being superstitious. If a song comes on and I paint well to it, it becomes part of my playlist, If I paint badly when the song is on, it will never get played again!
I really think the music I have on affects my work greatly.
Sarah McLachlan is the most important musician to my work. It's to the point that when I get into a jam in a painting, and things aren't going well, I put one of her CD's on and like magic, I paint well again. I once listened to one of her cd's for six straight months while I was trying to finish "Almost", a difficult mask painting. By the last month of my working on it people visiting my studio were saying "Will you finish that damn painting so we can turn that CD off!"

A Link to VOX Live by Sarah McLachlan:

I have different playlists depending on the painting I am working on. When I painted "Reels" I listened to Music from the 1930's to 1950's. Sinatra, Bing Crosby, Tony Bennett, Dean Martin, and Perry Como, who I think is underrated in comparison to the others mentioned. I would say half of the music I listen to everyday is music from this time period.
Perry Como - Magic Moments: The happiest song I have ever heard...

When I am working on the "Wave" paintings I listen to alot of Jimmy Buffett. His songs are fun and it's hard to be in a bad mood when he is on. I think it comes through in the waves. He is hard to avoid hearing anyway if you live in Florida. Actually I like any song that has a beach sound to it...

I do try to listen to music that fits the mood of the painting I am working on. If I were painting a box of rocks, I would listen to Madonna.


One of my other favorites is someone most people have never heard of. Her name is Shannon Worrell. Her first album, Three Wishes, was released in 1994 and was recorded in a basement studio in Northern Virginia. Both Dave Matthews and Tim Reynolds worked on the first album with her and Dave actually sings on a song or two. I think it is one of the best records ever made and I have no idea why she is not more famous. Below is a link to her work on Amazon and a clip from youtube, I encourage everyone to listen for yourself.


I also find that Sting keeps getting better and better the more I listen to him. I heard Ozzy once say that he wakes up and sometimes thinks to himself "At least I'm not Sting" ...I might wake up and think "At least I'm not Ozzy" who I don't listen to while working.

Which reminds me of a few other types of music I don't listen too. I never listen to any music that "yells" at me. If I want to hear screaming, I'll go home...just kidding, but I don't like any song that creates anxiety while I am trying to paint. No Rap, or Heavy Metal. Not that those genres don't have merit, I just don't like listening to them while I am working. I can't listen to Classic Rock anymore. Done - never again. I've reached my limit. I have friends who only listen to Classic Rock. I don't get that either. If I hear the Eagles, Skynard, Led Zep, ACDC, etc one more freakin time...500 times is enough times to hear any one single song...and every Memorial Day some station plays "The Greatest 500 Songs of All Time" and people listen like the list is going to change. "Well Johnny, Stairway was number two last year, and Lola was number one, maybe it will be number one again this year." - yeah, tell me tomorrow, I won't be listening.


NEVER with headphones. I see pictures all the time of painters working with headphones on. I never understood how that isn't a complete distraction.

I tried listening to audio books for a while and found that I was listening to the book and not concentrating fully on painting so I had to stop. I still listen to them in the car though to balance it out.

I also love listening to music I have never heard of. Feel free to post a comment of some of your favorites!!

I'm sure there is a bunch of stuff I am leaving out but that will have to do for now...

Posted by Clinton Hobart at 9:54 AM