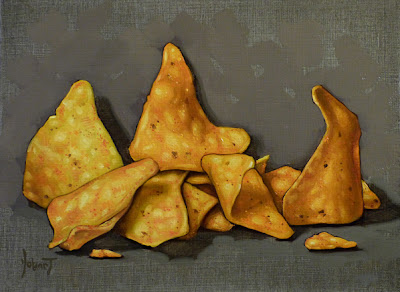 I posted a blog last week on adding dark backgrounds because they sell slightly better then lighter backgrounds. This started a conversation between my brother and I on selling out in which he sent me a video of Bill Hicks destroying Jay Leno for doing a Doritos commercial several years ago.
That in turn started a conversation on Facebook where a friend of mine, Geoff S., suggested a painting of "Doritos and Gin", which led to this. I, for the moment, have left out the gin. 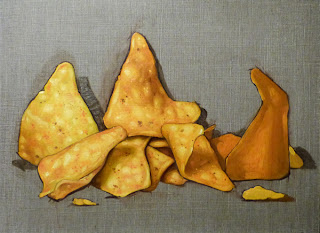 I was actually amazed at how difficult they were to paint. My minnies usually take about six hours each, this one took over nine!
The fun thing about them was that I seldom get to use this many shades of yellow and orange.
After I was finished I Googled "Dorito Painting" and only a few images had come up. All of them had the bag in the painting. It is always nice when you can make a painting that no one has ever made before. Or at least very few. I remember when I first lined up all of my fruits and vegetables in a 12 x 40 format in 2005, I heavily researched it and found none. Now I see them everywhere. 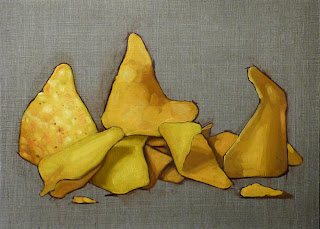 I deliberately toned my panel a bit darker then normal and added a touch of purple to it to compliment the orange. Each Minnie is done over two sittings. Aside from the chip on the left, this is what the painting looked like after the first sitting. 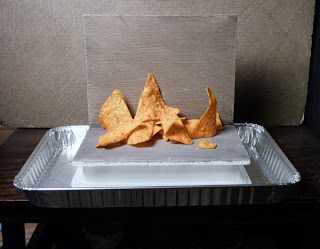 Doritos left out on a table will attract ants. I have no idea why an ant would eat them, there can't be much nutritional value to a Dorito. Perhaps ants don't care what is in them, they just like the way they taste.
Ants will not cross water to get to food so I created this modified still life setup to make sure I could leave them on the table without having a thousand friends over for dinner.
It is 9 x 13 baking pan, with an inch of water in it. I then put an island in the middle of it raised above the water, high enough so that my wooden model stand would not get wet. 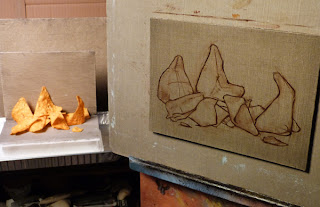 I always do a drawing first in burnt umber and white.
I bought a small bag of the Doritos. First of all the things are $4 a bag when not on sale so I got one of those mini bags for a buck, and yeah, I ate what was left. A long walk on the beach should offset it...
"Doritos" 6 x 8 Oil on Panel