A Simple Formula For Pricing Artwork?

Most painters I know have trouble with this question. Common methods for pricing are flat rates by size, flat rates by time, hourly rates, daily rates, random numbers, and sliding scales. One of my teachers told us to charge "the amount of money it will take for you to part with the painting".

Some artists are lucky enough to have a gallery set their prices. Some, sell by way of auction and have no control over it, and many are stuck somewhere in the middle.

The two biggest mistakes I see are artists make in pricing their work is too high, and too low. You're thinking "Thanks, I couldn't have figured that out." Pricing too low makes people wonder why it's so cheap, pricing too high can mean people may like it, but can't afford it. You have to find a middle that works for you. 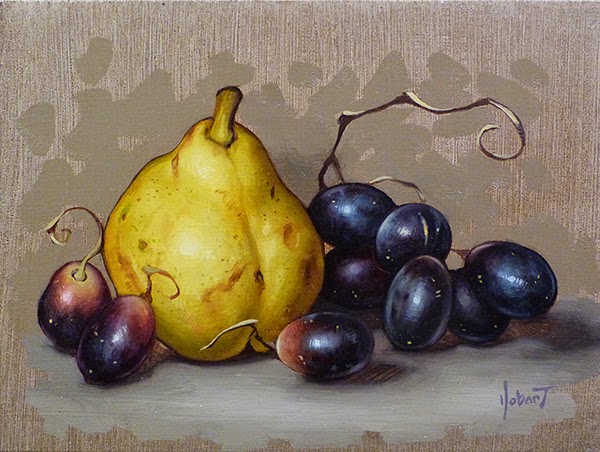 I'll begin with my "Minnies" because this is a very popular way to sell paintings right now both out of galleries and on eBay. If you are working at Macy's for ten dollars an hour you may realize that if you could make a small painting in six hours, and sell it for $60 you could make the same ten dollars, and not stand all day. However, in order to make $60 on eBay you need to sell the painting for roughly $75.  I see paintings go up for auction that are not very good by painters I know are capable of better. Ebay causes the painter to think "I'm not doing a great job since the painting is going to sell for twenty five bucks anyway." This is the worst kind of thinking. Every painting should be practice. Do the best you can every time and start the auction at a price that you want. If you don't sell, don't lower your prices and paint crap! You may have to realize that eBay just isn't right for you. It's OK! Not everyone is going to be the next eBay painting sensation, and it's a rather dubious honor at that. The goal for putting paintings on eBay is to do such a good job that galleries decide to represent you and get you off of eBay!

My galleries price my "Minnies" at a flat rate of $500. They are all 6 x 8 Oil on Panel,  Wave "Minnies" are $750 because they take longer. The reason for this according to Beth and Jane at Scottsdale Fine Art is that most people who buy them are repeat buyers and they like to know that when new ones come in, the price will be the same and it will not be "Surprise, it took him longer so the price went up" This is also good because I know how long they take, and how much I am getting. It's up to me to make sure that the painting doesn't take too long. I try to keep them to around eight or nine hours. I used to shoot for six hours but I have found they often needed more time. It is also somewhat of a game. I know that I can paint Apples, figs, grapes, bananas, and pears quickly so I often come in far under the goal. Eggs, metal, teacups, and the recent pine-cones and acorns took far longer than the goal so it balances out. I would also say that many buyers don't care or understand that bananas are painted quicker than pine-cones. To them it is a 6x8 painting and should be the same price. The "Red Apple and Cherries" pictured took under six hours to paint while the "Brown Eggshells" took almost ten hours over three days. Since they are both 6 x 8, they are both priced at $500. 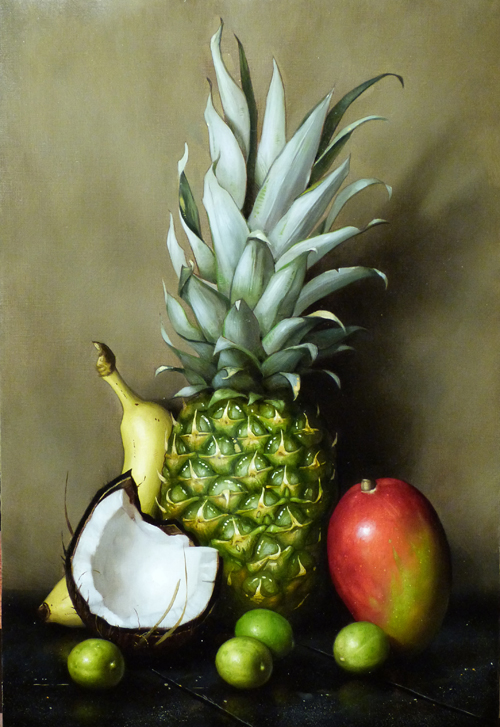 Moving on to pricing larger work. The first thing to think about is time. If a painting takes a week to paint at eight hours a day, and the cost of living is $4,000 a month, then you can't sell the painting for less than $1,000.00. It a simple way to look at it at first. You also need to realize whether or not you are a fast or slow painter. If you can finish in two days what takes others a week, you might be able to charge more. If it takes you two weeks, then you have to charge less or learn to paint faster.

Based on the above scale you can figure out almost any price. But of course it's not always that simple.
The above still-life and the wave to the right are priced almost the same because of the sizes yet they were very different in the way they were painted. ($6,500.00 gallery retail.)
What if the above scale is for  fruit and or flower paintings which take roughly a week or two to paint. Suddenly someone asks for an 18 x 24 of three plumbers wrenches, a small alarm clock, four cracked eggs, a crystal vase, a row of colored blown glass sculptures, and an empty bottle of Jack Daniels. That might take some time. Obviously you can't charge the above $3,500 for that. So how do you figure that out. That's where time comes in. If you know that if the painting was of flowers, it would take two weeks, and that this new composition will take roughly six weeks, than you multiple the rate by three. So the price of the painting would be $3,500.00 times three or $10,500.00 for all of that. Plus an additional fee for when it is finished and then they want you to make one of the wrenches green instead of grey. 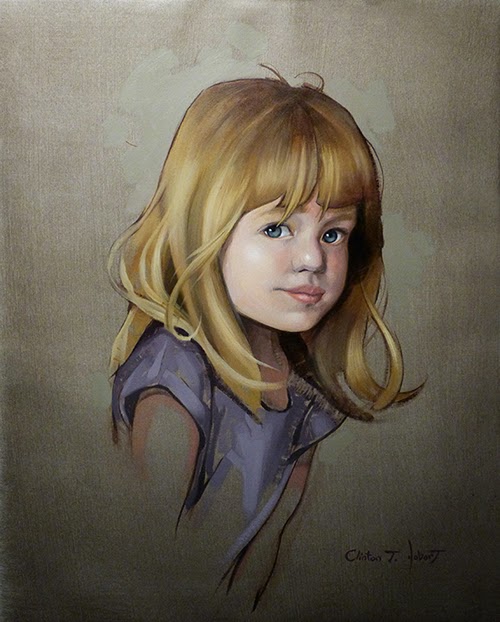 I know many portrait painters who have charts already set up so that anyone can just go to their website an have a look. I think it is important to have a range from inexpensive to very expensive. For me, a six hour, 16 x 20 portrait like this one to the right starts at $500.00. I do that because their is no real background, and the painting is mostly unfinished. I love painting them this way. The price may seem low but it's a starting point and the price goes up from there. If someone wanted a life-size full figure, with a complete background for example, that would be several thousand. Most portrait painters charge by the head so if someone wanted two children in the same size painting, the price would be double.


The last element of pricing is for paintings you make for you. Below is one of my mask paintings. The price on it is currently $28,000.00. I honestly don't care if it sells. Some people would consider the price low, some might consider them high. This painting was in a gallery two years ago and a guy was looking at it. When I told him the price he said "Very reasonable" I was alone in the gallery at the time, the owner had stepped out for a minute. Had she been there, it probably would have sold. Painting I can do, sales, not so much. I always say "I couldn't sell insulin to a diabetic".Oh well. 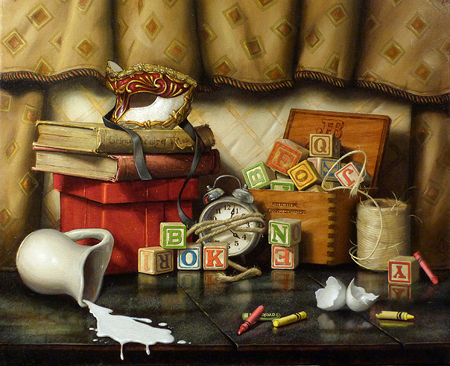 When pricing, be realistic, start lower and see how you do. I have work that ranges in price from $500.00 to as much as $50,000.00 so that almost anyone who wants a painting can get one. There are however times when you may just want the price you want and won't take less. I look at it like this. Are you any worse a painter than Britteny Spears is a singer? A you a better painter than Adam Sandler is an actor? You get my point. Sometimes you just have to say, "This is the price, and I am worth it!"

To any collector reading this I should also mention that you should always ask an artist how much they want for a painting, or make an offer. All of these prices sound great but can come down fast when rent is due. I know one very famous artist whose work was starting at $30,000. His air conditioning system broke and set him back a few grand. A woman in his studio saw a painting that she loved. She didn't know that it was there for years, and very humbly asked him if he would take what happened to be just slightly more than his air conditioning cost. He said yes. She was shocked, and thrilled, and so was he! Everybody won. Never be afraid to ask. This was a great story because the buyer didn't have very much money. There is little worse for a painter than finding out some billionaire,  worked you down $500 just to see if they can. If you have money, and the artist is either starting out or broke. For cryin' out loud pay them what they are asking if not more. Most painters I know will use it to buy art supplies to make more paintings with it anyway. I can proudly say that at least ten times in my life, maybe more, someone gave me more than my asking price because they thought the painting was worth it. I will never forget them.