Candy Crush or Candy Swipe? How About Neither One.

So there is this video game everyone seems to be playing called Candy Crush. It turns out it may be a rip-off of a game created two years earlier called Candy Swipe. So the owners of Candy Swipe published a letter and got some lawyers, and everyone is posting on Facebook, and playing the game, the Candy Crush has lawyers, and patents, and is trying to protect it's IPA because millions of people spend money on the free game and apps, and more talking, and more lawyers, and on and on and on and who cares?  Not me, don't play video games - can't stand them. When I read that this particular game has a feature which makes you wait a half hour unless you pay money to continue I chuckled...until I read how much it earns a day with that trick.
Disgusting.

If I don't play the game then why am I writing a very passionate Blog post on a subject I know almost nothing about? Well, I didn't really care...BUT, and I mean a big BUT -The company called King, that owns Candy Crush, is trying to trademark the words "Candy" and "Saga" and prevent others from using the words...And that is when the story got my attention. 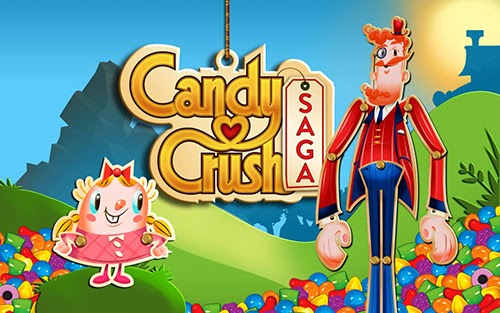 No company, group, or person  should own the rights to single words that already exist. They should not be allowed to copyright or trademark candy, or saga, or art, or illustrator, or even apple for that matter, and then limit or profit from it's usage.

"While King’s trademark of the word “candy” is getting the most traction, the company’s attempt to trademark “saga” is just as absurd.
This is peculiar for many reasons, including the fact that the word originates from an Old Norse word meaning “narrative.”
That any company should claim the rights to an ancient noun would be mildly hilarious if it didn’t have real legal implications for a small studio like Stoic, which may not ever be able to trademark their own game’s name." From a great article on http://www.forbes.com

Personally, I think companies should create new words. "Photoshop", for example is a good one. If they made Candycrush one word, who could say it wasn't theirs? But to be able to tell people they can't use the word "candy" is just wrong. If you want to copyright or trademark wolfcognottin, go right ahead. It's the word for when a company knowingly sells a product that will do harm, but that people will love anyway and spend lots of money on. McDonald's for example, makes the majority of their money wolfcognottin. Nothing came up on a Google search which means it doesn't exist...til just now.

When a company tries to trademark the word "candy" and "saga" to make money off of them. I will not buy their product, and I will tell all of my friends what they are up to and hope that they won't buy their product either. I hope no one ever spends another nickle on Candy Crush Saga...

Below are some links if anyone wants the whole story:

One last thing. To anyone who plays these games regularly I might suggest, or beg actually, that you carry around a book, or at least a magazine, and read something. It's cheap, fun and will definitely make you smarter.