Happy Easter!! Some J.C. Leyendecker Illustrations and an Old Joke. 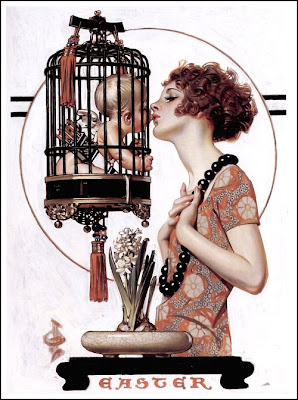 This is one of my favorite paintings and yet I don't get it at all. Maybe I love it because I don't get it.
Cupid, I'm guessing that is supposed to be Cupid, is locked up in a birdcage and being romantically kissed by his young and attractive captor? What does that have to do with Easter? Even if I sort of get the idea, isn't it more of a Valentines Day Illustration? I really have no idea but I love it anyway...I feel the same way about some of Stevie Nicks songs... I love them but can spend years trying to figure them out. Can anyone explain Silver Springs to me? The first few lines especially. 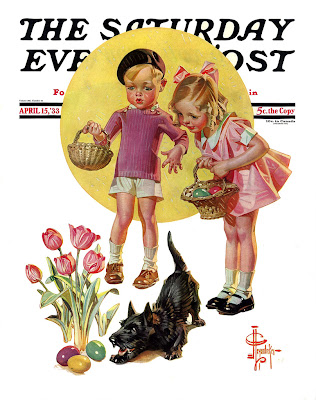 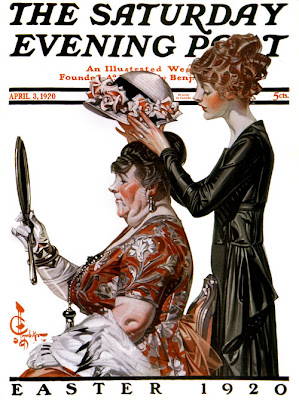 I just love the Black dress and the hair and face of the girl...well, I love the whole thing really. 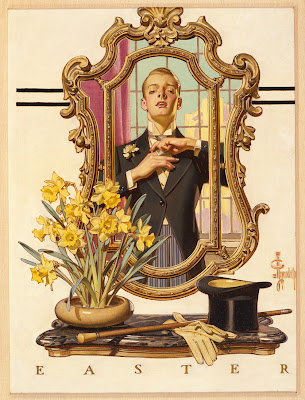 Classic Leyendecker above. Look at that mirror!!!

Because this is a happy holiday post I will end it with a joke my father tells every Easter, and I still find it funny...Hope you do too.

Three blondes died and are at the pearly gates of heaven. St. Peter tells them that they can enter the gates if they can answer one simple question. St. Peter asks the first blonde, "What is Easter?" The blonde replies, "Oh, that's easy! It's the holiday in November when everyone gets together, eats turkey, and are thankful and stuff..." "Wrong!," replies St. Peter, and proceeds to ask the second blonde the same question, "What is Easter?" The second blonde replies, "Easter is the holiday in December when we put up a nice tree, exchange presents, and drink eggnog." St. Peter looks at the second blonde, shakes his head in disgust, tells her she's wrong, and then peers over his glasses at the third blonde and asks, "What is Easter?" The third blonde smiles confidently and looks St. Peter in the eyes, "I know what Easter is." "Oh?" says St. Peter, incredulously. "Easter is the Christian holiday, that coincides with the Jewish celebration of Passover. Jesus and his disciples were eating at the last supper. Then the Romans took him to be crucified and he was stabbed in the side, made to wear a crown of thorns, and was hung on a cross with nails through his hands. He was buried in a nearby cave which was sealed off by a large boulder." St. Peter smiles broadly with delight. Then the third blonde continues, "Every year the boulder is moved aside so that Jesus can come out...and, if he sees his shadow, there will be six more weeks of winter."


*There is an updated version online where the word "Blond" is substituted for "fool".
When I was a kid, it was a blond joke, so I am posting it as a blond joke. If you are offended by blond jokes, stop dying your hair.